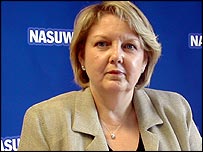 Who would win? Chris Keates or the Green Cross Code Man?

I came across these two articles over the weekend thanks to Twitter.

The first is on the TES website and puports to contrast two views on pupil/student voice:

On one side is Chris Keates, the head of the NASUWT, on the other is Schools Minister, Vernon Coaker. Unfortunately it doesn’t actually do a very good job of this. Chris Keates puts forward a clear, reasoned argument, but essentially based around the idea that ‘advanced pupil voice can be bad for teachers where it isn’t done well, so it shouldn’t be done at anywhere.’ Vernon Coaker’s counterpoint unfortuately doesn’t address this argument directly at all, it just reads like a Government press release on current policy. I’d love to see someone like Vernon Coaker, an ex-teacher and real advocate for children and young people, address the NASUWT’s arguments head on.

However, the other article I came across put the other side of the arguement very well in an incredibly practical way. It from the blog of a couple of teachers (one which I’ll be following closely from now on) and talks about how getting students’ feedback on their schemes of work is an essential part of improving learning and teaching. They’ve got a great name for it too: