This blog isn’t one sentence old, and yet I already I feel like I owe an apology.

Why? Well, because I have resurfaced a sorry image to accompany this blog that, for me anyway, represented an historic moral low-point in British political campaigning. Its ethically-absent self was first presented to the public on the 16th of June 2016 (not on the side of a bus on this occasion) – just six days before the momentous EU referendum was due to take place.

In my defence, I’ve chosen it for a reason. It powerfully encapsulates what many commentators believe to be the crux of why so many Britons exercised their democratic right in voting to leave the European Union: concerns about unrestricted immigration (which is a polite way of expressing it).

Our educational sessions equally echo this conclusion as it transpires immigration is central to the young people we meet, both in their analysis of the Brexit vote and when discussing the respective merits / faults of our post-Brexit future. Therefore, it’s the focus of today’s blog.

Courage, everyone. This isn’t an easy one.

Our opposing further reading is probably a good place to start. It helps to inform deeper analysis.

Suffice to say however, that in the years leading up to the EU referendum, the latter of our two articles was closer to the pulse-of-the-nation. Sensationalist headlines focusing on ‘benefit tourism’, ‘NHS burdens’, ‘crime explosion’, and ‘British jobs for Britons only’ were commonplace. But were they / are they sincere? And, to what extent will departure from the EU allow greater scope for tackling potential migration concerns?

Everyone knows that raw data can be moulded and shaped like clay on a potter’s wheel to reveal whatever the potter desires, however if we keep it simple there’s truth to be found. Let’s run to statistical objectivity thanks to the frisky number-crunchers at the Office for National Statistics and their quarterly report. The graph below is the most recent data available showing migration up to March 2017. What does it show? 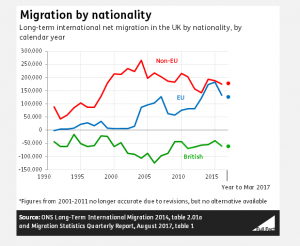 Breathe. What all those raw figures mean however is very much up to you and likely to reinforce whatever political subscription you already possess (it certainly does with the political elite). That being said, I do believe there is value in tackling misconceptions were they so self-evidently lie; this is abundantly clear in the case of ‘benefit tourism’, the fear that EU migration leads to hordes of idle, exploitative Europeans arriving to clog up your G.P waiting room with strange languages. This simply isn’t true. Furthermore, that for every job taken by a migrant (not specific to EU migration) means a British citizen misses out; this is labelled the ‘fixed job fallacy’, the idea that there are only ever a certain number of potential jobs available and that migration occupies rather than creates jobs. Also, not true.

Well, analysis aside, we are where we are. So, what will post-Brexit EU migration look like?

Again, that depends (which is rapidly becoming my favourite thing to say). If during the Brexit negotiations, access to European markets mean an irrepressible link to the right of EU countries to work in the U.K, it is feasible that the British government may agree to those terms. Equally feasible however, through negotiation, is that trade and customs agreements are forged that don’t stipulate an open labour market.

It would appear that the balance rests in whether the government believes that migration is a positive or negative force. Which is interesting, because whilst successive governments have promised to slash the numbers of immigration to the U.K, very little substantive legislation has been passed to this effect. In fact, immigration targets have been consistently and wildly missed year on year. Maybe this discretely nods towards an area that popular opinion differs from Britain’s best interests.

I promise the next one will be far more succinct, involve less maths and more potential band names.

Finally, in other Brexit news, whilst my colleague and I have been secretly planning a Brexit-themed comedy double-act in darkened pub rooms, it appears we have been beaten to the punch. Read here for a catalogue of the best Brexit orientated jokes from this year’s Edinburgh fringe.

Involver is a social enterprise that helps young people to have a say in the places they go and the services they use.

If you'd like to discuss how we could work with you please contact Greg or Asher on
020 3411 3294
or email
info@involver.org.uk

This website uses cookies to improve your experience while you navigate through the website. Out of these, the cookies that are categorized as necessary are stored on your browser as they are essential for the working of basic functionalities of the website. We also use third-party cookies that help us analyze and understand how you use this website. These cookies will be stored in your browser only with your consent. You also have the option to opt-out of these cookies. But opting out of some of these cookies may affect your browsing experience.
Necessary Always Enabled
Necessary cookies are absolutely essential for the website to function properly. This category only includes cookies that ensures basic functionalities and security features of the website. These cookies do not store any personal information.
Functional
Functional cookies help to perform certain functionalities like sharing the content of the website on social media platforms, collect feedbacks, and other third-party features.
Performance
Performance cookies are used to understand and analyze the key performance indexes of the website which helps in delivering a better user experience for the visitors.
Analytics
Analytical cookies are used to understand how visitors interact with the website. These cookies help provide information on metrics the number of visitors, bounce rate, traffic source, etc.
Advertisement
Advertisement cookies are used to provide visitors with relevant ads and marketing campaigns. These cookies track visitors across websites and collect information to provide customized ads.
Others
Other uncategorized cookies are those that are being analyzed and have not been classified into a category as yet.
SAVE & ACCEPT
Powered by